Streetcars from around the world put to work in San Francisco

Streetcars were a major mass transit tool world wide until they were displaced by busses. In 1982, the old San Francisco streetcars were to officially be retired, to be replaced with modern streetcars now called light rail. Fortunately, the vintage cars survived and are still in service to this day. Today’s historic streetcars running on the streets of San Francisco are from many cities including Milan, Italy and some consider them “museums in motion.”

Through a fluke in history in 1984, the famous San Francisco cable car system required a major 18 month systemwide overhaul. To generate tourist interest while the cable cars were not available, the city started running vintage streetcars on weekends. The service was a hit, and the city scrambled to find more cars to put into service. Numerous tracks were restored to provide broader coverage. These old classics required maintenance and rebuilding, so a group of volunteers stepped up and took over the management of the growing fleet. The group is the Market Street Railway. You can join or donate by clicking here. 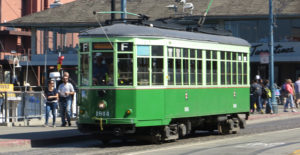 Voila’, the turn of the century streetcars were carrying passengers once again. In a stroke of fortune and genius, San Francisco has found itself collecting historic cars, importing them from all across the globe, preserving these iconic people movers.

Thanks to the assistance of the Market Street Railway’s volunteer restorers, with over 1,000 due paying members, the city now sports a diverse collection of streetcars, freshly painted and working like new. They traverse two lines, including a popular tourist route along the picturesque world famous wharf.

The majority of the cars are easily recognizable for their streamlined art deco shape, revolutionary at the time –1930’s, while others are various older wooden boxy designs. The ride is what you might expect from this old tech – a lot of rocking back and forth, but it adds a sense of adventure to your journey. 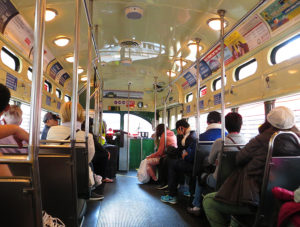 You will see on the side of each car it’s city of origin and date of service. Some have wooden doors, and all are painted brightly in the colors of the city transit system they were originally from. There is even one car that the driver has to stand, and it has none of the traditional controls.

Over 20,000 passengers ride the streetcars every day. Plans are underway to expand the number of lines, as both locals and tourists love to ride these beautiful classic cars. One proposal has the E-line running from Fisherman’s Wharf to Fort Mason. In preparation, the Market Street Railway group, has been acquiring additional antique streetcars to be restored for service on future extensions.