Imagine 600 acres of peaceful and serene Scottish countryside to explore including a castle. It is perched on a cliff and the views from the water up to the castle make a formidable site.

On land, one funny thing to share is the entrance to the viaduct that leads to the castle. It starts at what looks like an old ruined Roman Arch. Well it was designed, by architect Robert Adam in the eighteenth century, to look like an old Roman ruin to create a dramatic entrance – it is not a ruin. And yes from there you will have a spectacular photo opportunity of the castle.

As it proudly stands above the water, you will have great views to be inspired by. In the central courtyard, walk over to the overlook. Glancing down notice there is a secret walkway along the cliff between the clock tower courtyard and the main house. This was so the servants could traverse between the buildings unseen by the homeowners and their guests.

When you enter the castle you will be amazed by the huge collection of flintlock pistols and military swords. It is the largest collection of its type in existence, apart from Her Majesty the Queen’s at Windsor Castle

My two favorite rooms where the stylish round drawing room with its grand views and the kitchen. Oh my many fabulous meals must have been cooked here. The kitchen is huge as it needed to be and had multiple places for pans to sit over fires at the same time. Have you ever wondered about how they could possibly serve so many during a multi -course meal? It was fascinating to imagine the craziness that must have occurred here.

And before you enter the kitchen take a look at all the bells on the walls just below the ceiling. There must have been two to three dozen and you would need to know the room from which each bell could be rung. Watching the bells must have been a dedicated job for someone.

For added fun there are figures hidden throughout the castle for those young and old to search out. Some are hard to find on your own. If you are having difficulties you might try looking in the chandelier. (Or ask the room guide.) 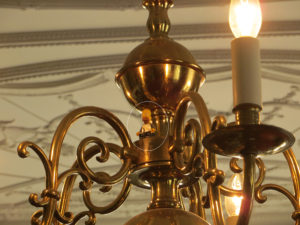 For the kids there are Lego figures hidden in the rooms

Each major room has laminated cards, in several languages, for information specific for that room. And if that is not enough there will be a guide dressed in period clothing that can answer all your questions. It was amazing how many people walked through the room without stopping and chatting with the guide. They know tons of information and love to point out the unique features of their room. So please stop and chat for a minute or two.

There is so much to see here beyond the castle. A good place to start is the farm house, which is a visitor’s center. On the property you will find a deer park, a swan pond, a walled garden, an adventure cove and it would have been fun to go down to explore the beach. We had a great experience storming this castle! 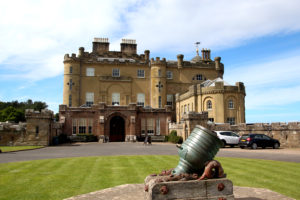 The castle dates from 1569. It began as a stone tower house and has had several additions over the years; including major additions starting in the 1770s and in 1877. The last owner was the Marquess of Ailsa, the chief of Clan Kennedy. In 1945, the castle was passed on to the National Trust for Scotland.

Sidenote – Eisenhower Hotel in the Castle

The top floor of the castle is actually a hotel, called the Eisenhower Hotel. I would have loved to stay there. If you have the budget for it, it would be special. In fact, it is considered one of the most exclusive places to stay in Scotland. It only has 6 guest rooms. At night when you have the place to yourself it must be both invigorating and calming.

From Glasgow it’s about a 50 mile drive or from Ayr it is 12 miles.

Price Non-members (includes castle and its grounds) – May 2017

All year; limited facilities between November and March

Family Tours of the Castle